Though Seoul is one of the most developed cities in the world, when it comes to tourism, the capital city of South Korea is, surprisingly, often overlooked. But the city of Seoul is home to interesting tourist sites, vibrant nightlife, incredible shopping, and delicious food.

Whether you have a week or just a few hours to explore the city, you’re guaranteed to make loads of fun memories in this eclectic city. From ancient royal palaces to fine-dining restaurants, there is so much to explore and experience in Seoul.

Seoul is just a short flight away from many other Asian destinations and Incheon International Airport is a common stopover between North America and Asia. This makes Seoul an ideal location for a long layover or a weekend getaway. But if you’re short on time, deciding what do in Seoul can be quite overwhelming.

So, if you just have 48 hours in Seoul, you’ll love this detailed Seoul weekend itinerary to experience the best of the city in just 2 days!

Disclaimer: This post may contain affiliate links. If you make a purchase or booking through one of our links we may earn a small commission (don’t worry, it’s at no extra cost to you).

7:00am – Land at Incheon International Airport

One of the largest and busiest airports in the world, Incheon International Airport is like a mini-Seoul in itself. At the airport you can experience everything from local Korean cuisine to traditional spa treatments and even fun cultural activities.

From the airport, head to your hotel to drop off your bags before beginning your sightseeing tour of Seoul. We recommend booking your accommodations in the Myeongdong district due to its proximity to the airport.

There is no better place to start your Seoul 2-day tour than the Myeongdong shopping district. This lively Seoul neighborhood has everything from bustling shopping markets to delicious street food stalls where you can try lots of delicious Korean food.

Myeongdong is also home to some of the trendiest bars in Seoul, but it’s still morning and we suggest you hold off on the bars until nighttime. Take your time exploring the shops and markets of Myeongdon, it’s one of the best neighborhoods in Seoul.

Grab an early lunch in Myeongdong before leaving so you can stay focused on sightseeing in Seoul. Begin your tour with Gyeongbokgung Palace, one of the most iconic attractions in Seoul. The palace has been located here since the 14th century, however, the present version was built in the 19th century.

While visiting Gyeongbokgung Palace, don’t miss the Changing of the Guard ceremony which a beautiful reenactment of yesteryear. The ceremony is observed twice a day – at 10:00am and 2:00pm.

Pro Tip: Purchasing the Discover Seoul Pass is an awesome way to save money in Seoul. It gives you free entrance to 42 attractions in Seoul including Gyeongbokgung Palace and the N Seoul Tower. You can also use it as a T-Money card when you’re riding the metro and buses around Seoul

3:00pm – Insadong and the Gyeongin Museum of Fine Art

Another popular neighborhood in Seoul, Insadong, is dotted with charming hanoks (traditional Korean houses) and gently curving dancheong (intricately painted roofs). There is no shortage of things to do in Insadong, and you’ll definitely want to spend a couple of hours exploring this picturesque Korean neighborhood.

Insadong is crammed with traditional Korean teahouses so stop at one for an afternoon break. We recommend Dawon Teahouse which is regarded as one of the best teahouses in Insadong. It’s located in a hanok on the grounds of the Gyeongin Museum of Fine Art, another popular Seoul attraction.

Just a short walk from Insadong is another must-visit location in Seoul. Cheonggyecheon Stream, a 7-mile-long man-made stream, is perfect for a late afternoon or evening stroll.

The Cheonggyecheon Stream was a natural stream that flowed through Seoul before rapid urbanization caused it to be paved over in the 1960s. But then in 2003, a massive urban renewal project led to the riverbed being excavated and the stream was turned into a peaceful pedestrian park.

Engirdled by concrete and high-rises, the Cheonggyecheon Stream is a perfect peaceful hideout to stroll quietly while adoring the beautiful view of the city. The stream is also adorned with small waterfalls that help drown out the noise from the city, and you’ll almost certainly see birds bathing in the shallow water.

One of the best things to do in Seoul has to be visiting Nam Mountain, an 860-foot high peak in the Jung District.

You’ll start your visit by riding the Namsan Cable Car to the N Seoul Tower near the top of the mountain. From there, you’ll take the elevator up the N Seoul Tower to the observation deck which provides a 360-degree view of the entire city of Seoul.

Here you can also enjoy an unforgettable dining experience at N Grill. It is one of the best restaurants in Seoul which serves French and Korean fusion cuisine.

If you want to make the most of your 48 hours in Seoul, then sleep is simply not an option. And visiting a noraebang is one of the best things to do in Seoul at night!

A noraebang is a Korean-style private karaoke room. You’ll have your own microphones, TV, and even your own waitstaff to ensure you’re never short on food and drinks to keep the karaoke party going all night long.

If you are looking for the best noreabangs in Seoul, then head to the Hongdae District where you’ll have dozens to choose from.

Itaewon is yet another popular neighborhood in Seoul. Often touted as the multicultural district, Itaewon is best known for its outstanding food scene. Here you’ll find food from all over the world! Whether you choose to dine on Indian, German, Italian, Franch, or Mexican cuisine, Itaewon has something for everyone.

You’ll find the highest concentration of restaurants on the street behind the Hamilton Hotel – just take Exit #2 from Itaewon Station.

A jimjilbang is a traditional Korean bathhouse where you can enjoy soaking in hot pools, steaming in saunas, and bathing in waterfalls.

For hundreds of years, jimjilbangs have been an integral part of Korean culture. They are the perfect place to spend some relaxing time with friends and family. Some of Seoul’s larger jimjilbangs even contain karaoke rooms, cafes, salons, fitness centers, and libraries so you can spend an entire day and not run out of things to do!

The swanky Gangnam District will be your last stop on your 48-hour tour of Seoul. This district is one of the most popular neighborhoods in the city and it has become even more famous thanks to the K-Pop mega-hit, Gangnam Style.

Full of upscale condos, high-end plastic surgery clinics, and designer boutiques, Gangnam is home to many of Seoul’s wealthiest residents. In fact, it’s sometimes referred to as the Beverly Hills of South Korea.

But, what draws tourists here is the vibrant nightlife of Gangnam. From cheap Korean street food stalls to laidback cafes and cozy restaurants, this district has something for every taste and budget. A night of dining, drinking, and partying in Gangnam is the perfect way to end your 2 days in Seoul!

So, there you have it! Our recommended itinerary for your 2-day trip to Seoul. Did we miss anything? Let us know in the comments!

Traveling to Seoul? Check out our favorite books and travel guides.

Jimmy and Tah – About the Authors:

We are Jimmy and Tah, American and Thai millennials who left our careers in military and finance to become travel inspirers & storytellers.

We started our life of non-stop travel in September 2017 and began sharing our journey on DivertLiving.com. Now we’re living the life we have always dreamed of – traveling the world and working from wherever we love (as long as there is Wi-Fi and coffee). 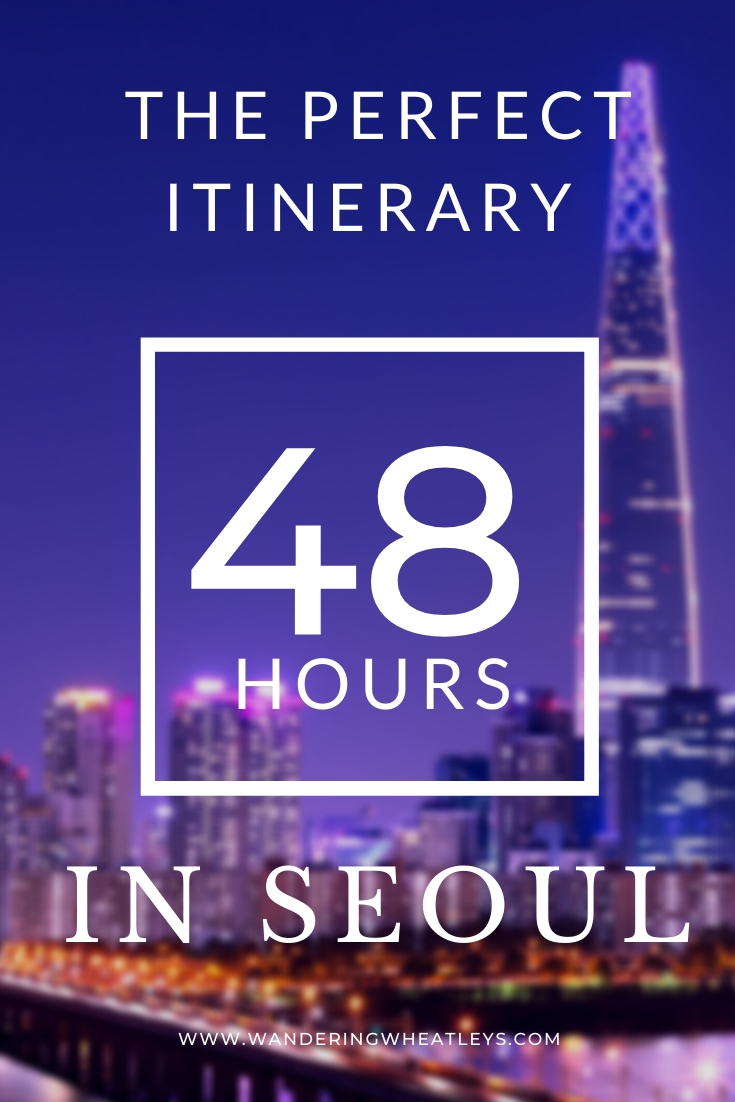