A popular trip from Khiva is north, to the city of Muynak where you can visit the “ship graveyard”. The residents of Muynak once made their living by fishing on the Aral Sea. But for decades the sea has been decreasing in size and volume. Fishing boats were abandoned in the sand that was once the seafloor, businesses closed their doors, and the residents had to relocate in order to find work.

If that sounds depressing, it is. But it’s an interesting day trip to see what remains of this once busy town and to learn a bit about the history of the area. There are also several nice stops along the way, in and around the town of Nukus.

Read on to learn all about what a day trip to the Muynak Ship Cemetery will entail, and the importance they have in Uzbekistan’s history. Enjoy!

Disclaimer: This post may contain affiliate links so if you make a purchase or booking through one of our links we might earn a small commission (but don’t worry, it’s no extra cost to you). This helps us keep this site running and we are deeply grateful for your support!

History of the Ship Cemetery

For many years the town of Muynak was a bustling fishing port, laying on the banks of the abundant Aral Sea. At the time, the Aral Sea was the 4th largest inland salt sea in the world. But the need for water to support cotton farming led to irrigation of the two river systems that supplied the Aral Sea.

The Amudarya and the Syrdarya rivers were extensively irrigated and the water flow began to decrease in the 1960s. By the year 2000 the Aral Sea had lost 3/4 of its volume, putting over 10,000 fisherman out of work and an entire village of people left to find a new home. The small amount of water that is left is too salty for fish or fauna to inhabit.

Today the virtually abandoned town of Muynak is over 100 miles from the water. Most of the residents were forced to move in order to find new jobs. Ships that once cruised the sea, hunting for fish, now sit rusting in the sand where the seafloor once was.

The cheapest and easiest way to visit Muynak and see the ship cemetery is to hire a tour driver for the day. It will cost around $65 USD for 2 people in a private car for the day. We booked our tour through Islambek Travel in Khiva. Keep in mind that drivers don’t speak English so you’ll need to do some research ahead of time to know exactly what you’re visiting.

The distance from Khiva to Muynak is 490 miles roundtrip. The trip will take 10-14 hours depending on how long you take at each stop and whether or not you leave anything out of your itinerary. You’ll have a quick stop for lunch at a local spot with delicious soup and very questionable bathrooms. Be sure to bring snacks!

You will need to leave very early if you want to see everything that is listed below. We left at 8:30am, skipped the museum (since we were planning to stay in Nukus and go the following day), and didn’t get to our hotel until 8:15pm. If we were going all the way back to Khiva we wouldn’t have been back until 11:30pm.

Note: all passengers need to get out of the car and stand in the waiting area every time the driver stops for gas. It can be a bit confusing as your driver probably won’t speak English.

Stops Along the Way

The Chilpik Kala (also spelled Chalpyk, Chilpyk, Chil’pyk, and Shilpyk) is a large, circular mound of dirt and sand that overlooks the Amudarya River and miles of desert in all directions. You’ll have a steep climb up a dirt path to the top. There is no fee to enter the area.

The Chilpik Kala is considered to be an ancient Zoroastrian “Tower of Silence” which is one of the earliest examples of traditional funerary ritual. The Zoroastrian would lay their dead here in the open so that birds could consume their flesh. They believed that after death, bodies could be contaminated by demons and the birds were actually purifying the body by eating it.

Once the flesh was cleared, the bones were collected by the family and then placed in stone ossuaries to be buried. This particular Tower of Silence was likely constructed in the 1st century BCE.

The Mizdakhan Necropolis is a fascinating ancient cemetery filled with both new and old graves. The various monuments are situated on three small hills, the oldest settlement was established around the 4th century BCE. This was Mizdakhan, the second largest city in Khorezm at the time. Tombs and mosques have continued to be built for centuries, up to current time.

As you climb the steps from the street you’ll pass by more recent graves. They are surrounded by a fence, most with a small wooden ladder laid across the ground. We thought that perhaps the bodies were transported here on the ladders.

As you continue through the Necropolis, you’ll see some impressive mausoleums that you can enter. In the distance you’ll see what looks like a city of mud brick domed structures. This is the most interesting area to explore. You can see the changes in burial practices and the introduction of Islam to the region.

The Karakalpakstan State Museum of Art

The Karakalpakstan (Karakalpak) State Museum of Art, also known as the Nukus Museum, is the crown jewel of Nukus and pretty much the only reason that tourists visit the city. It boasts the second largest collection of Russian avant garde art in the world. There are approximately 90,000 items housed in the museum including paintings, sculptures, and ancient artifacts.

The museum’s founder, Igor Savitsky, was a Russian who was born in Kiev in 1915, and died in 1984. He initially visited Karakalpakstan in 1950 as part of an archaeological dig led by Sergei Tolstov. He was so intrigued by the culture that he stayed until 1957. During that time he began collecting Karakalpak treasures including carpets, jewelry, costumes, and various works of art.

He was also collecting other works of art during that time, including Russian avant garde artwork that was being destroyed by the Soviet authorities.

Your driver will park in a parking lot that overlooks what used to be the Aral Sea. Now it’s just a sandy wasteland that stretches on for miles. Near the parking lot is a lighthouse where you can climb to the top, a small restaurant, and a collection of yurts. And looking down to the former sea floor you’ll see a collection of old, rusty ships sitting in the sand. They are surrounded by a stone walkway and there are two larger ships off to the right.

Descend the stairs to the sand and take a closer look at the ships. The most impressive are the massive ones off to the right. They are covered in graffiti and rusted clear through. If you attempt to climb either, be careful as the rust is deteriorating and one wrong step can lead you crashing through the floor.

The area with smaller fishing boats, that is surrounded by the stone walkway, has boats that are safer to climb. One even has a ladder to make it easy. It’s amazing when you consider that this entire area was once totally under water.

Overnight Trip to the Aral Sea

If you want to venture even further into the Aral Sea dry lake bed, opt for an overnight tour. The price of a tour to the Aral Sea is quite a bit more expensive as you’ll be off-roading in a 4-wheel drive car that runs on petrol. You’ll drive all the way out to where the bank of the Aral Sea now begins. And it’s here that you’ll spend the night, in a yurt in the middle of nowhere.

Expect to spend $400 – 600 per car for up to three people. The price of the 2-day tour, 1-night tour will depend on where you start the trip (Khiva, Nukus, or Muynak) and the style of accommodation you choose.

We hope you enjoy your trip to the Aral Sea Ship Cemetery! 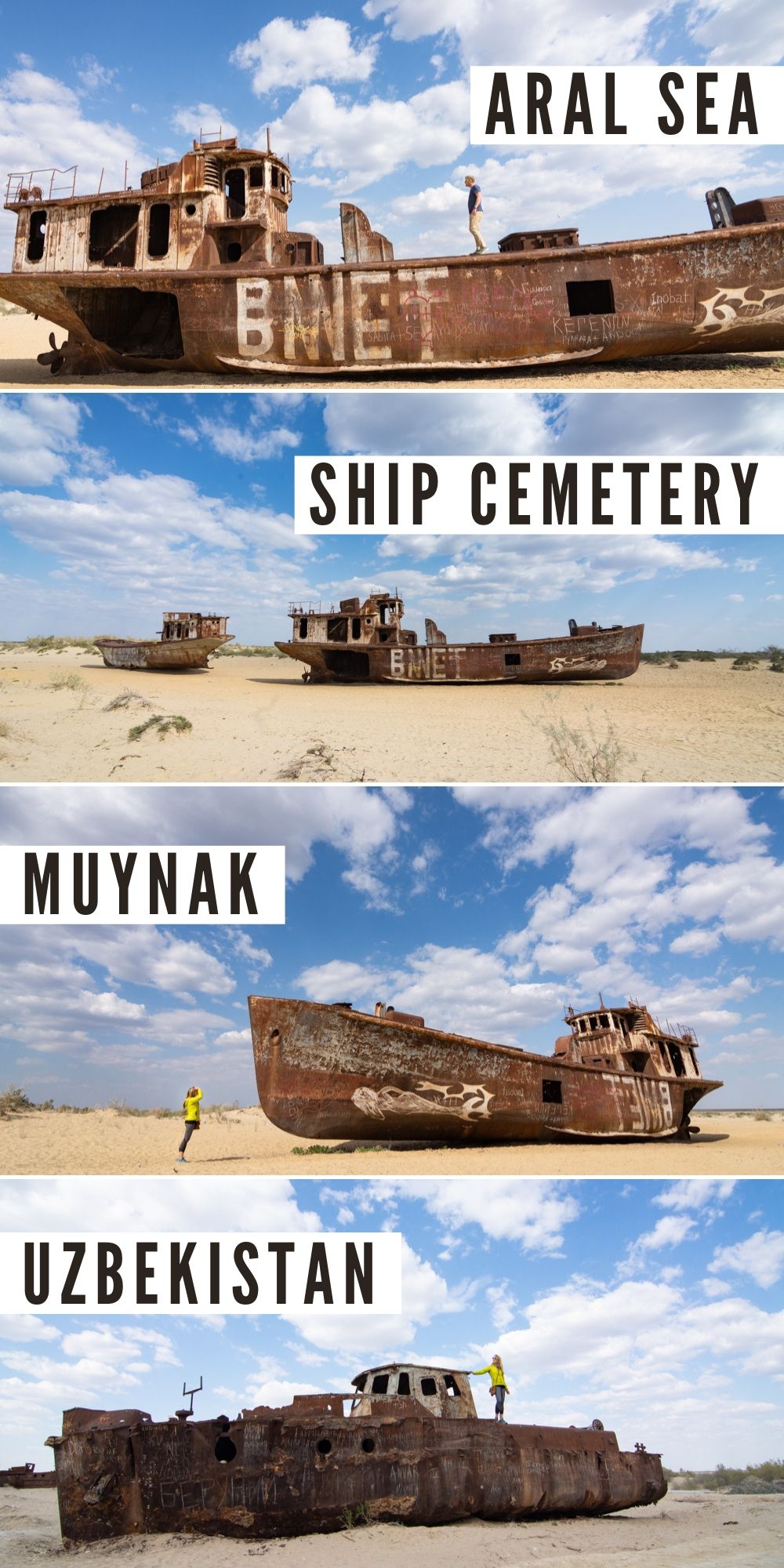