With the spectacular and spiritual Nile River running through the center of what was once known as Thebes, and ancient well-preserved temples sprinkled throughout, it’s no wonder that Luxor is referred to as the “world’s greatest open-air museum”.

Ancient pharaohs erected temples on the east banks of the Nile to celebrate their triumphs and they built elaborate tombs on the west banks of the Nile to prepare for their deaths. In fact, the entire valley is still full of tombs that archaeologists are working hard to uncover to this day. Communities of people are being relocated so that their houses can be demolished and digging underneath can begin. Even important buildings and mosques are being destroyed so that archaeologists can unearth the vast treasures that lie beneath them.

Check out our list of the top things to see and do in Luxor, plus a detailed 2-day itinerary to help you plan your trip. Enjoy!

Preparing for Your Trip to Luxor, Egypt

Luxor, as in all of Egypt, has a hot desert climate although the summer days in Luxor can be hotter than other Egyptian cities. Average high temperatures from June through August are above 104°F and average lows remain above 72°F. So if you visit in the summer months, be prepared for sweltering heat. The winter is much more temperate, with average temperatures in the 40-70°F range. Winter is also the peak tourist season in Luxor so expect more crowds.

What to Pack for Luxor

In the summer months the midday sun in Luxor will be unrelenting. Light, breathable attire is a must. Check out a few of our Egyptian summer staples:

The sun sets early in the winter and once the sun goes down temperatures drop significantly. You’ll want a sweater for evening outdoor excursions. Luxor gets less than .04 inches of average annual precipitation so you can leave your rain jacket at home. Check out my list of everything I packed for Egypt here!

Getting to Luxor and Around Town

Luxor is about 430 miles south of Cairo and the famous Pyramids of Giza. Both buses and trains depart daily between Luxor and Cairo with a stop in Giza. Luxor International Airport (LXR) is conveniently located and many major cities around the world offer direct flights.

Many people arrive in Luxor or depart from Luxor via luxury cruise ship sailing on the Nile River to and from Aswan. If you haven’t booked a cruise already, read more about our favorite ships sailing the Nile River.

Like this post?! How about...
The Best 9 Nile Cruises in Egypt: Luxury Sailing from Luxor to Aswan

Be sure to have small change on you for a “baksheesh”. You’ll need to tip your car, boat, and carriage drivers on your daily excursions as well as the bellhops that carry your bags to your room. And it can be really challenging to get (and keep) small change.

You will encounter guards at every temple and tomb who are dressed in traditional clothing. They will ask you to take their photo, or try to give you information about the temple, or show you something that you may otherwise miss, and then ask for baksheesh in return. It can get a little annoying but keep in mind that they only earn about 1,200 LE/month (~$65 USD) so they rely heavily on tips to support their families.

Yes! Luxor is incredibly safe for tourists and locals alike.

Where to Stay in Luxor

The Hilton Luxor Resort & Spa is the premier luxury hotel along the east bank of the Nile River in Luxor. Located in the village of Karnak, just outside of the busy downtown area, the Hilton offers the ability to get away from the crowds and relax right on the bank of the Nile.

A spacious, modern room with a private balcony overlooking the gorgeous infinity pool and the spectacular Nile River awaits your arrival. Plush bedding, a walk-in shower, and all of the amenities you could ever want will make it difficult to get out of bed and leave the resort every day!

The real jewel of the Hilton Luxor is the spectacular outdoor area right on the bank of the Nile River. Featuring a heated infinity pool, comfortable poolside lounge areas and bars, and riverfront seating – it’s the perfect place to spend a sunny afternoon. Be sure to check out the Sunset Bar & Terrace around sunset and soak in the view of the lush banks across the river while you sip on fruity cocktails.

Top Things to See and Do in Luxor, Egypt

The Luxor Temple dates back to 1392 BC, this temple contains relics from 5 different cultures in one place – Roman, Greek, Christian, Islamic, and ancient Egyptian. Entrance fee: 100 LE/person. Photography is free.

3. Valley of the Kings

The tombs that have the best-preserved colors are the tombs of Rameses IV, Rameses III, and Rameses IX. The tomb of Rameses III is not to be missed! The Saptah and Sety II tombs are less popular with tour groups so you’ll likely have them to yourself (and the guard hoping to earn a baksheesh). Don’t miss the brightly colored eagles painted on the ceilings. Merenptah tomb has the steepest descent to the massive, intact sarcophagus. Don’t miss the well-preserved, colorful carvings near the entrance.

4. Valley of the Queens

At the Valley of the Queens you can enter the tombs of 2 different queens which are quite a bit smaller and less elaborate than their male counterparts. If you’d like to see the tomb of Nefertari, the favorite of King Rameses’s 34 wives, you’ll need to pay for an additional ticket for 1,000 LE/person. Entrance fee: 80 LE/person.

5. Valley of the Workers

The Egyptians who created the carvings in the tombs in the Valley of the Kings lived in a village nearby. In their spare time they created colorful tombs for themselves in an area known as the Valley of the Workers. Their tombs are much smaller and the walls are not carved but the colorful paintings are spectacular! Entrance fee: 80 LE/person.

The Al-Deir Al-Bahari Temple (Temple of Hatshepsut) was originally constructed as a funeral temple for use by King Hatshepsut who is famous for being the only confirmed female pharaoh. Entrance fee: 80 LE/person; 2-way tram ticket: 2 LE/person.

Colossi of Memnon consists of two large statues that were originally carved from a single piece of limestone. One is intact and original and one has had quite a bit of reconstruction. Entrance: free!

Hot air balloons take to the air every day just before sunrise allowing passengers to watch the sky turning the temples on the banks of the Nile beautiful pastel colors. Magic Horizon Balloons Luxor has an impeccable safety record and friendly, knowledgeable pilots. They will arrange all of the logistics to ensure that you have an unforgettable experience!

You’ll be picked up from your hotel around 4:45am, enjoy coffee and a snack onboard the small boat that will take you across the Nile, and then watch as your balloon is inflated. Your pilot will give some general history of Luxor while pointing out temples along the way. The ride will take about 45 minutes to an hour.

The food in Luxor is absolutely incredible and you must sample the local fare! Here are just a few of our favorite restaurants:

10. Shop in the Local Markets

The Old Market Street souq in Luxor is the perfect spot to get that Egyptian souvenir you’ve been eyeing during your Egyptian vacation. Colorful lamps, resin pharaoh statues, alabaster stone vases, and gold jewelry are just a few of the many types of souvenirs you’ll encounter.

Haggling is expected so expect to negotiate a price that is about 50% the initial offered price. But keep in mind that you’re only really haggling over a few dollars and they probably need it more than you do.

Be sure to check out our favorite shop, Aladdin’s Hule, for a huge selection of antique treasures. Even if you don’t buy, it’s worth a stop to meet the hilarious and eccentric owner.

Day One: Explore the West Bank of the Nile

Fill up on the delicious breakfast buffet as you have a long morning of exploring temples ahead of you! Your first stop of the day will be the Valley of the Kings which has been the site of royal burials since around 2100 BC. Intriguingly, ancient Egyptian kings would begin the construction of their tombs on the day they were crowned king.

Some kings like Rameses III reigned for quite a long time so their tombs are incredibly long and intricately carved and painted. And others, like Rameses IX did not enjoy a long life so their tombs had to be completed in haste (when the king died, the workers had 70 days to complete construction of the tomb as that was the length of time needed for mummification of the body).

Your next stop is the Al-Deir Al-Bahari Temple which was constructed by the only confirmed female pharaoh, King (technically queen) Hatshepsut. After the death of her husband who was also her half-brother, she claimed that the gods turned her into a man and was thus able to rule as king.

She is depicted as a man in all Egyptian statues and it was only at the discovery of her lover’s tomb in the 1900’s that archaeologists realized she was actually a woman. Unfortunately, all of the statues and carvings depicting Hatshepsut in this temple were destroyed by her angry stepson, Thutmose III.

Day Two: Explore the East Bank of the Nile

Today you’ll be exploring the main temples of the East Bank of Luxor. Your first stop will be the Karnak Temple where you’ll wander through 134 well-preserved columns.

You’ll see many damaged images of King (Queen) Hatshepsut throughout the temple as she made more than a few offerings here so that the priests would accept her as a pharaoh.

A road of sphinxes connects the Luxor Temple to the Karnak Temple and it is expected that when excavations are complete, somewhere in the neighborhood of 6,000 – 7,000 sphinxes will be discovered. Many buildings along this road, including a 200-year-old mosque, were destroyed to make way for the excavations.

Your day of excursions will end at the Luxor Temple where you will find evidence of 5 different cultures in one place – Roman, Greek, Christian, Islamic, and ancient Egyptian.

You’ll pass by the oldest mosque in Egypt on your way inside and the groundbreaking of that mosque was actually how the Luxor Temple was discovered – prior to that it had been lost under the city streets for more than 1,000 years! Look at the door that is about 30 feet high on the mosque – that used to be the entrance to the temple! That should give you an idea of how buried this temple really was.

A headless Greek statue and paintings on the walls of the temple where Romans attempted to cover the ancient Egyptian carvings with their own religious figures during their reign reflect the influence of other cultures on Egypt throughout history.

Finally, head back to your hotel to treat yourself to a refreshing cocktail while lounging by the pool. It’s been a long 2 days of learning about the ancient history and ruins of this amazing city!

We hope you have a wonderful time exploring the ancient city of Luxor, Egypt! 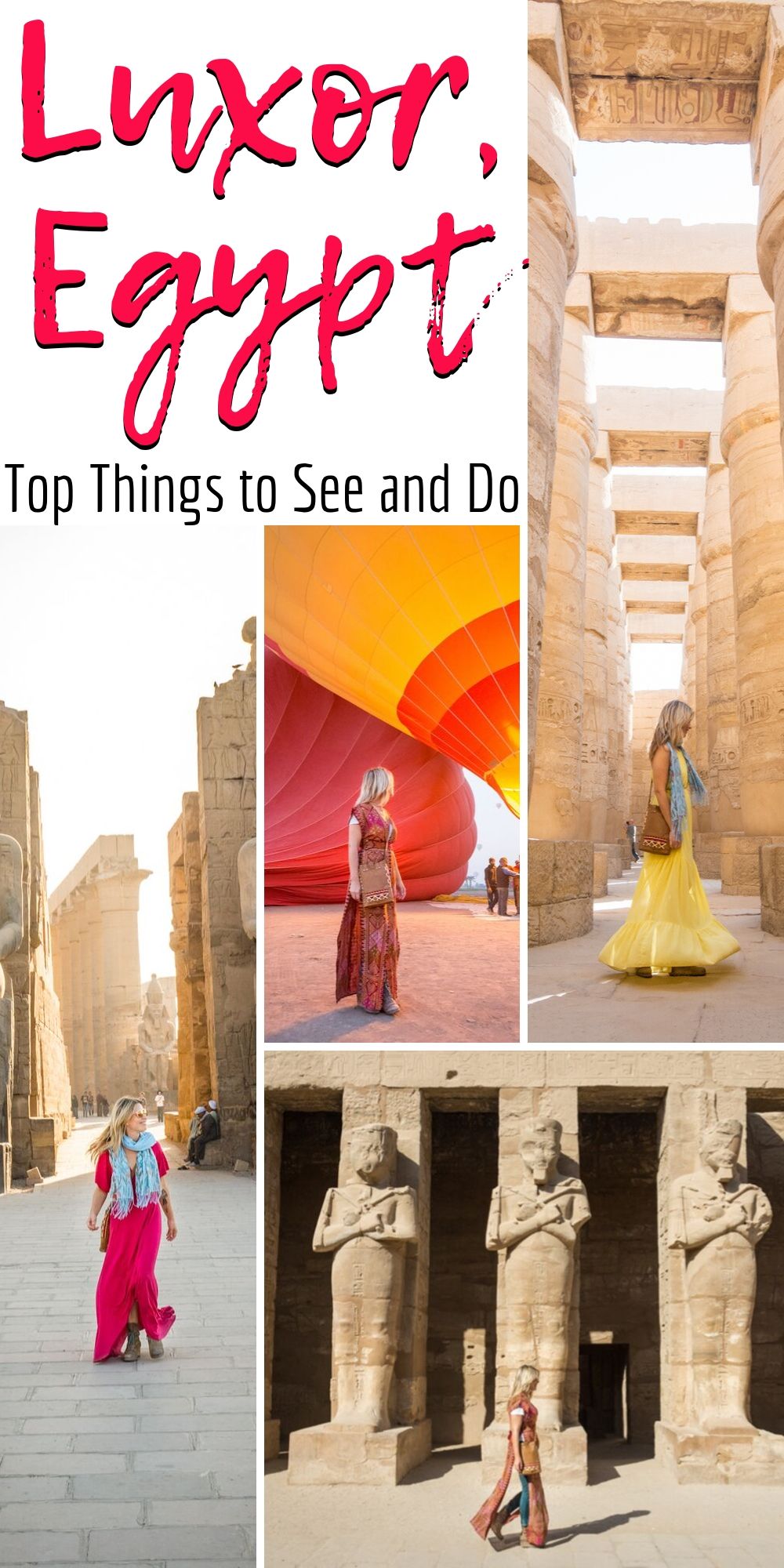 What wonderful memories this brings back. Your photos are lovely. I did not embark upon a hot air balloon ride when I was there – that looks like the perfect activity to see these gorgeous and massive monuments! 🙂