No trip to Morocco is complete without sleeping in a stunning riad, snapping photos of colorful doorways, treasure hunting in the souks, or sampling the delectable Moroccan cuisine! Rich, exotic flavors of olives, lemon, and saffron melt in your mouth and will have you licking your plate.

Strange flavor combinations like savory chicken pastries topped with sweet powdered sugar don’t make sense on paper but make perfect sense on your tongue. You owe it to yourself to sample all of the local flavors at least once so follow our guide to be sure you hit all of the highlights!

Also, make time to take a Moroccan cooking class during your trip so you can continue enjoying the flavors of Morocco after your return home.

Morocco is the 5th largest producer and exporter of olive oil in the world. You’ll probably get a little bowl of spiced olives before every meal. And they make their way into pretty much every Moroccan dish. If you’re not an olive lover, better get used to picking them out of your food!

Moroccan khobz (bread) is also generally doled out prior to every meal. Many Moroccan families bring their dough to be baked in the communal wood-fired ovens found in every town across the country.

A typical Moroccan breakfast generally consists of french bread, butter, honey, and an assortment of jams. Each person will also typically receive either a piece of msemen (flaky, layered flat bread) or of baghrir (a spongy pancake).

This thick, creamy soup is made of chickpeas and usually contains whole chickpeas, noodles, and occasionally pasta. Traditionally it is served as a starter or used during Ramadan to break the fast at dusk.

It is served in most restaurants and by many street vendors.

This breakfast concoction is made from semolina, milk, water, olive oil, and spices. It looks a bit like traditional porridge but doesn’t have the same sweetness. In fact, it’s a bit bland unless you top it with more oil and spice.

It is typical among Middle Eastern countries to serve a variety of cold “salads” (which are actually more like dips) as an appetizer before a meal. A few of the most common include:

Similar to samosas, briouats are a sweet or savory stuffing wrapped in warqa (filo dough) and fried. The stuffing is generally some sort of meat like chicken or beef, or simply cheese or vegetables. They can also be served with a sweet filling and served as dessert (described below). They are generally triangular in shape and served as an appetizer to a meal.

This is probably the most common food in Morocco and one that you’ll find in almost every restaurant in every town. It is a savory stew that is typically made with meat, poultry or fish together with vegetables or fruit. Everything is slow cooked together inside of a clay pot with a conical lid (both the food and the clay pot it is cooked in are referred to as a “Tajine”).

Make sure you try all 4 of these typical Moroccan tajines:

If you can’t fit a traditional tajine in your suitcase, don’t fret, you can easily have one shipped directly to your house!

This tasty dish consists of very small steamed balls of crushed durum wheat semolina (resembling rice), usually served with stew spooned on top with some type of meat and vegetables. Traditionally it is prepared on Fridays (the Muslim holy day) but you can find couscous at most restaurants and cafes on any day of the week.

Want to make some of the Moroccan dishes at Home? Check out these cookbooks!

You’ll find stalls all over the country (but particularly in Jamaa El Fna in Marrakech) with steaming vats of snail soup and locals gathered around on tiny stools. You’ll pluck the snails from their shells with a toothpick and then sip the incredibly salty broth that many Moroccans believe is good for digestion and fever.

The snails have an earthy, meaty flavor, similar to mushrooms. But their consistency is a bit chewier.

If you head to the Jamaa El Fna as the sun goes down, you’ll find numerous food stalls just starting to fill up with tourists and locals alike. Very aggressive touts will try their best to get you to sit in their tent but hold out until you find one selling sheep’s brain.

It’s almost unimaginable to eat a whole brain so luckily it comes chopped into small bits. The texture is a bit like day-old gravy or spam. If you get the sauce on top and can handle the gelatinous texture, it’s actually really tasty.

This is another delicacy served up in the Jamaa El Fna evening food stalls. And as with brains, if you actually got a head on a plate it would probably be difficult to stomach. But you can order in quarters and it comes chopped into pieces. It’s on the fatty side and tastes a bit like pork belly.

If you like sweet and salty all in one package, you’ve got to try pastilla! Traditionally stuffed with pigeon, this flaky pie is served piping hot and dusted with powdered sugar. But it’s more likely to be stuffed with shredded chicken than pigeon these days. Check with your server before you try to order it as many restaurants either run out or don’t have it regularly (even if it’s on the menu).

Stuffed msemen is flattened square-shaped dough kneaded together with a mixture of peppers, onion, and tomato and then grilled, rolled, and served to-go! You can find a few street food msemen vendors around the medina in Marrakech.

This Moroccan favorite is made of green tea, a handful of fresh mint leaves, and a ton of sugar. Expert tea pourers can hit a small glass from a foot or more above. The resulting bubbles are meant to make it more appealing and to show that the tea is ready to drink.

It is generally consumed before meals, after meals, with every meal, and anytime throughout the day (and night).

With over 100 different varieties of dates, it would be a shame not to taste at least a few of them while visiting Morocco. Dates are also eaten to ceremoniously break fast during Ramadan as the date palm is regarded as the “tree of life” in Islam. You can purchase dates by the pound from stalls in the square or enjoy them cooked in many tajine combinations.

These crescent-shaped pastries are made from almond paste that is scented with orange flower water and cinnamon. They are generally served with an assortment of other sweet treats with your tea.

These delicious treats are made of folded dough stuffed with almond paste flavored with orange flower water and cinnamon. They are then  fried and soaked in honey. They are sticky, sweet, and highly addicting!

These chewy, macaroon-like cookies have a crispy, cracked crust. They are often flavored with coconut or almond and always made with orange flower water.

This simple dessert is just as it sounds – sliced oranges sprinkled with cinnamon. It is often included as the dessert in set menus that many restaurants throughout Morocco offer.

Looking for more details on what to see and do in Morocco? Enjoy our favorite Moroccan guide books! 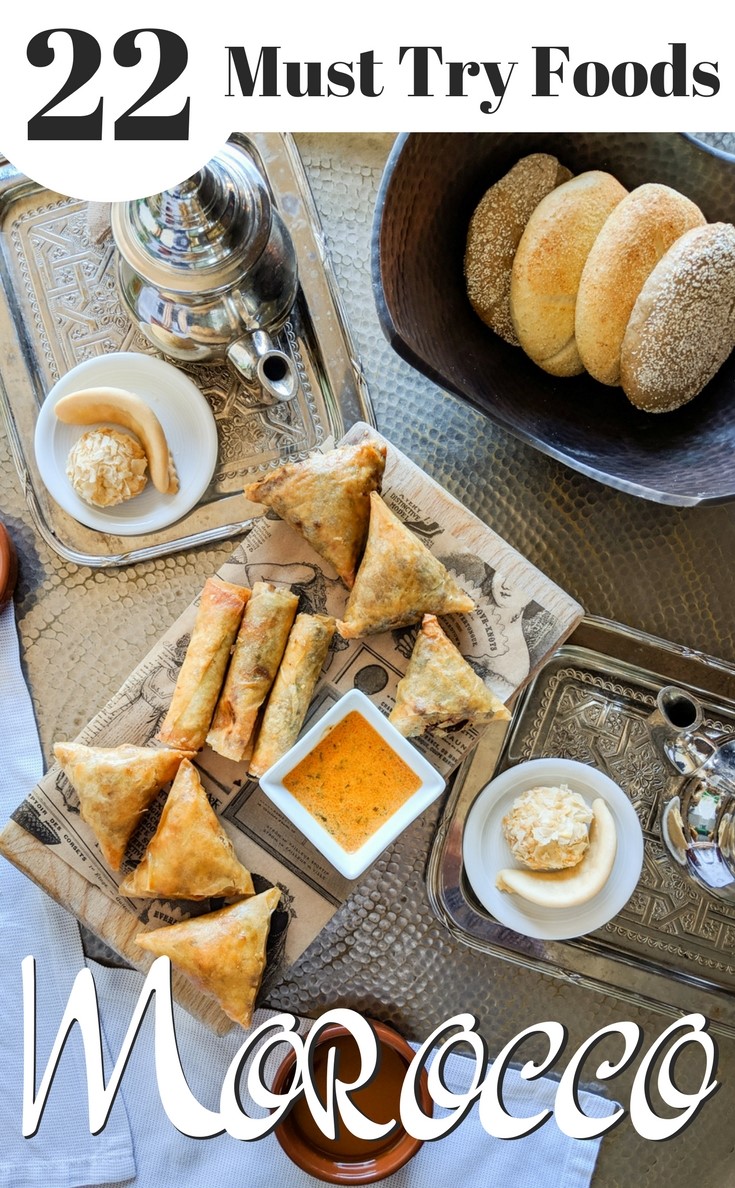